Roll the Dice, Write a Novel

“You gotta have a gimmick.” -Ethel Merman

It was early October. October is the month I have come to dread as “The Birthday Month.” My mother, my sister-in-law, two of my nieces, each of them have birthdays in October. Four birthdays in 31 days? That’s like cruel and unusual, no? Because of this, I only date women whose birthdays are in winter.

Now, I struggle buying birthday and Christmas gifts for anyone; I find it difficult to buy something in a store or order something online that shows a personal consideration for someone, a special, singular meaning that represents our relationship to each other, and I cannot knit.

My nieces pose an especially tough challenge, however. Since they’re all still young and thus growing in their size and developing in their tastes, I’m convinced that most presents would prove only a fleeting enjoyment. Any article of clothing, they’d grow out of in six months, any toy they’d grow bored by in two weeks.  More importantly, I aspire to be the "cool" uncle who gives them gifts that strike a balance between entertainment and education. "Cool" didn't mean simply "fun," then, it meant "fun" and "advanced" and "meaningful." My oldest niece has begun writing stories, for instance, and I’m always eager to encourage her and her sisters’ artistic sides. Thus, I want gifts from me to be the ones that give them enjoyment while also making them well-rounded people, ones that inspire as well as entertain.

A tough challenge, however. So, my search for a present for my oldest niece began miserably, as I rejected the idea of clothing, of vapid music or DVDs, of books that seemed either too advanced or not advanced enough. My quest became frantic as the deadline (three days out, the maximum allowed if I expected the gift to be delivered on time by the U.S. Postal Service) loomed. Then, casting about desperately on Amazon, I discovered: 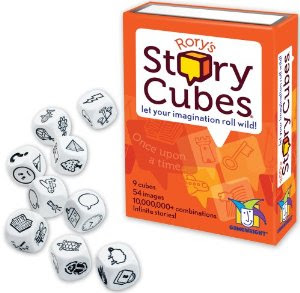 Rory’s Story Cubes. A simple but powerful concept for storytelling. Nine six-sided dice with 54 different images on each face. You roll the dice, and use the images that come up as the links to create your own story. You can use the pictures on the six sides of every die to create a nice outline for any storyteller to follow. The basic set contains nine dice, for over a million different potential results. Not quite a million monkeys typing on a million typewriters and coming up with Hamlet, but certainly a boon for possible ideas. Fun. Educational. Thought-provoking. Inspiring. Perfect.

My problem solved (for this niece, at least, for this year, anyway), I exhaled in relief and ordered the basic set as well as the three-dice “Enchanted” and three-dice “Action” accessory sets, and had them shipped 2nd-day air. I brushed the palms of my hands together: finis. Now my niece could create story after story on her own. Not only could the gift be fun for her but it could also exercise her burgeoning creativity. Pretty cool. She could practice creating stories using the dice as prompts as a way to develop her writing muscles. Work masked as fun.

I could relate. I knew all too well that to become a writer you had to work hard, put in the time, show the discipline, exercise that muscle. Goodness knows it was still a struggle for me. Sure, I’ve written a novel, but only one. Only one, because I suck. I use any excuse not to write. I’d been procrastinating and stalling on my next one, trying desperately to figure out a prompt of my own…

A gift for her could be a gift for me.

Yeah, I know. Writing a novel based on a roll of pictured dice. If I told him the plan, William Faulkner would've taken a sip of bourbon, then spit it right in my face. Pretty lame. A cheap gimmick, yup. I don’t care.

And: not original. If I told her the plan, Virginia Woolf would've taken one of those rocks out of her pockets and thrown it in my face. A quick search on the Internet shows that I won’t be the first to try this. Here are a couple of blogs that discuss the same idea:

How to Write a Book Now

I don’t care. I suck because I procrastinate. Whether procrastination comes from fear or perfectionism or sheer laziness, I need to knock it off. Whatever gets me productive, I’ll take it.

So when I called my niece on her birthday to a)confirm she had gotten the gift (these confirmations sometimes prove tricky) and b)confirm she enjoyed the gift, I requested that she do me a favor c):

Roll the story dice and arrange them in an order. I would then write a novel based on that result.

After a brief negotiation over terms (some felt my niece was entitled to a co-authorship and a lion’s share of any future profits; she has settled for a “Story by” credit with renumeration to be determined at a later date, most likely in the form of a very nice dinner at the restaurant of her choice), last Saturday my niece rolled Rory’s Story Cubes and arranged them. 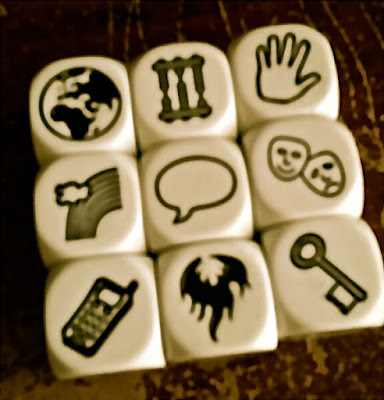 When I was in college, my friends and I would spend long nights playing the card game “Hearts.” Each and every round when the cards were dealt, it became a point of pride for everyone, upon receiving their cards, to loudly complain about the horrible hand they were dealt. “These are awful!” “What a steaming pile of crap!” “I have, the worst, cards! The worst cards ever!”

A quarter-century later, Rory’s Story Cubes has made me nostalgic.  I mean, look at those dice. Look at them! What the hell am I going to come up with using that? I’m not going to go so far as to accuse my niece of deliberately sand-bagging me, but I feel backed in a corner already. At the same time, however, I do feel challenged to come up with something interesting from that pile of crap. I feel excited to prove that I can come up with something worth reading based on those nine dice. I liked how-to-write-a-book-now.com’s outline vis-a-vis the cubes:

…so I’m going to use that as my clothespins on the line for now. I reserve the right to alter that structure, however. That’s kinda the point, isn’t it? Fly by the seat of my pants, write without a net, see where the pressure takes me? The more I think about it, the more intrigued I am about what story I will create from that pile of mess.

Not only that, but asking my niece to roll the dice put her in a position where I was accountable to her to actually, you know, write the thing. By avowing on the Internet my intention, I make myself accountable to the three people who read this blog, too. As my guilt and my fear have proven to be the most effective motivations, fear over disappointing my niece and three strangers, and the prospect of the resulting guilt might combine to be the most motivational cocktail ever to get me to write my next novel. Perhaps cheap, but also perhaps effective. I’m not above that, and I’m not above gimmicks. But...

Tomorrow:
...One gimmick doesn’t seem like enough.
Posted by Sophisticated Rogue at 9:10 AM

Huh? Well, I've been back in the United States for just over six months now, bouncing back and forth from Los Angeles, CA to Boise, ID, around the midwest, and now Philadelphia, PA. I'm trying to figure out what the next step is (spoiler alert: (shrug)), trying to get some things down on paper, trying to decide what creative projects I want to complete next, and decompressing from what was an amazing trip that's only gaining in meaning to me the further I get away from it.

But six months seems like more than enough time to take off from this blog, so let this serve as a re-acquaintance, maintenance, etc. Few things:

1. If you look at the toolbar, you'll see a page marked "Rogue Trip - Full". I've gone through all of my posts during my trip around the world, compiled all of my writings ("Travel Dispatches," "Rogue Trip Playlettes," and various other thoughts), and put them in chronological order. It came out to 86 single-spaced pages, which surprised the Hell out of me. Like three of those pages are actually interesting! Seriously, as I compiled the posts I read some of them, and they did bring a smile to my face. I've been writing about the trip since I've returned to the United States in the hope that something tangible (a book, play, whatever) will emerge from my memories of 27 countries in ten months. Having the written posts all in order did start to make the narrative congeal for me. Maybe you'll enjoy the congealing, too.

Next, I'll be breaking them up into individual posts on the page, tagging them, etc. for easier navigation.

2. I'm heading back to Los Angeles next week, where I'll begin rehearsals for the re-mounting of The Sophisticated Rogue, a play I wrote and first mounted at Zombie Joe's Underground Theatre in 2006. Then I directed but this time I'm actually acting in it, a terrifying prospect. I'll be sure to pass along more information as it emerges, but for now know it'll run for three Saturday performances only - December 5th, 12th, and 19th at 8:30pm. Also, I'll be maintaining sort of a "production diary" during rehearsals on this blog, just to capture the magnitude of my fear and anxiety of performing the largest role I've ever done...

4. I'm going to be posting on the blog more often, updating everyone on my creative stuff, and bringing people along on some ideas that I want to complete, so be sure to check back to see what's up.

5. I would like to thank everyone who checked out the blog during my trip. I was away for a long time, and the encouragement I received from people who enjoyed what I posted was a huge help in getting me through it. I'm glad you could watch my journey, in a way. But traveling was only the first part of the "trip." Now that I'm back, the second part is to have my travels prompt me to greater art, to become more productive and grow as a writer. Hopefully you'll continue to watch as the journey continues.
Posted by Sophisticated Rogue at 9:48 AM