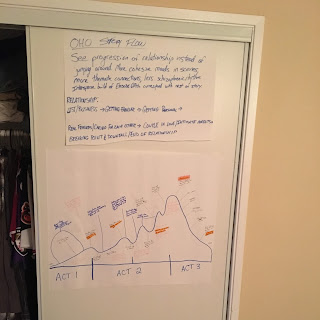 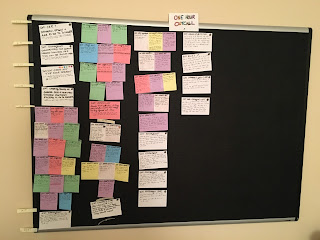 Just a brief update on One Hour Outcall.

We have a cut of the film.

It’s just the first cut. It’s only a rough cut at this point. So it’s the beginning. But when we screened it last week, even knowing that we were only just starting a process that will take time, while I watched occasionally the thought popped into my head, “Hey. Look at this. This is shaping up, here. We’re putting together a movie, here. This is becoming a thing, here.” Each part of the journey has a beginning and an ending, and watching the cut seemed somewhat like an ending and a beginning at once. A cut of One Hour Outcall exists. Another milestone reached. It’s shaping up. Watching the cut felt good.

Watching the cut felt surreal, as well. Some of you have watched our teaser trailer and commented that it’s weird to watch me onscreen. Suffice to say, it’s weirder for me than it is for you. I get trapped in my own brain that’s trapped in the actor’s brain, the actor who is me, then I remind myself that it’s me, to get out of my own head, and then I wonder, “Who’s head am I in? Mine right here, watching, or the head of the guy I’m watching, who’s me?” and then my heads are buzzing and I want a cup of chamomile tea. So I needed tea last week, for sure.

But despite the surreality, watching the cut felt good. Sam Hook, our editor, did a fantastic job and we all acknowledged, it’s a great start. The look of the film is already terrific. The tone of the scenes are unique, intricate, and compelling. The inability to judge myself aside, the performances are great. The film felt real. Not just as a piece, but as a process. It felt like another step towards creating something good and interesting and something people will enjoy. I’m proud of the work we’ve done already so far.

Again, there’s more to be done. Post-production is a process in itself. Our next step is to continue editing, shaping the film, getting it to picture lock. Then comes color correction, sound design, music, and everything else. So we’re a ways off. We still need your help. Please continue to consider contributing to the film - I’ll be renewing my pitch in a week or so to help us get to the finish line.

But it’s shaping up. It’s becoming a thing. We’re closer. Each step gets more and more exciting. I need a cup of tea.
Posted by Sophisticated Rogue at 3:32 PM