When I was a teenager, I had a brief and wildly unsuccessful stint on my high school’s speech & debate team. My category was Extemporaneous Speech (“Extemp”), where each competitor is given a current events question (e.g., “How has the Reagan Administration’s economic policies affected the morale of major American cities versus the American farmer?”), and then given a mere fifteen minutes or so to prepare, write, and rehearse a seven minute speech. The competitor then delivers that speech to between one and three already bored parents of other speech & debate club members, parents who sit in uncomfortable desk-chairs resenting the loss of their Saturday trapped in a dusty classroom deprived of air conditioning, forced to listen to a teenager who is not their own.

As mentioned, be it due to my relative lack of skill (the “common” wisdom) or to the insular, political world of high school speech & debate which championed only cliquish insiders and oppressed an outsider who participated only due to being cut from the J.V. basketball team (my interpretation), I was wildly unsuccessful at “Extemp”. But over the course of two years finishing fifth in heats of seven and failing to move onto any final rounds, ever, I did discover a modus operandi for beginning my speeches, an M.O. that I consider genius, and an M.O. that I’ve carried with me throughout my growth as an artist.

Back in 1986, most “Extemp” combatants went into battle with accordion folders stuffed with reams of clipped articles from the Daily Mail or archived issues of The Economist magazine (I imagine that now, the arsenal consists of an iPad). Upon receiving their question, they would scurry to a cafeteria table, spread out their research material, and feverishly begin to outline their speech with facts and statistics. Once the outline was complete, they would begin pacing the room, mumbling to themselves, rehearsing their speech in its entirety.

I would spend most of my preparation coming up with the perfect sports analogy.

That was my M.O. I began every “Extemp” speech with a sport analogy. It was my style, much like Bob Dylan playing acoustic or Spike Lee doing that conveyer belt thing with a character in every single one of his joints. Sports analogies in “Extemp” speeches was my thing. I did it every single time. Perhaps it was due to some deep-seeded resentment of having to participate in speech & debate rather than play on the basketball team. More likely, it was because sports was something that not only I knew, but knew could always be used as a metaphor, a metaphor for anything.

So I would spend much of my rehearsal time linking the fall of the Ferdinand Marcos regime in mid-80s Philippines to the responsibility Lou Carnesecca bore for the lackluster play of St. John’s in the Big East, or describing the military buildup of the the Soviet Union in the allegorical form of New York Giants linebacking corps, or making the clearly air-tight comparison between Chilean General Augusto Pinochet to George Steinbrenner. Sure, sure, I got into details eventually. I had a reasonable grasp on current events. I read U.S. News & World Report every week; I even enjoyed it. But my sports analogies were my signature. When the moment came to deliver my speech, I would stand up in front of the classroom full of parents and launch myself into Extemporaneous Speech eccentricity by saying something like, “Sino-Soviet relations could learn a lot from the rivalry between the Boston Bruins and the Montreal Canadians.” I figured that by relating even the most subtle of world affairs to an aspect of sports, I was making a connection that would be seen by the judges as at once astute and relatable.

Wildly unsuccessful. Occasionally as I launched into explaining why Dwight Gooden and Daryl Strawberry were exactly like George Schultz and Alexander Haig, I could see a bored father raise an eyebrow, intrigued simply by names he recognized. But most of the time, I could tell the small scowls on the faces of the mothers were pans of my efforts, and most of the time, the fathers’ eyebrows were raised in skepticism or even disdain. The crass, unserious world of sports had no place in the lofty realm of world affairs, even if it was only in the opening of a slapdash “Extemp” speech by a kid wearing khakis too baggy, a tie too long, a delivery too rushed, and a part of hair too much in the middle of his head.

But I still love sports analogies, precisely for the same reason. It’s trite and has been hammered to death by every columnist from Red Smith to Jay Mariotti, but trite is truth. The sports world is a microcosm for the rest of the world, for the real world. The sports world is perfect as an allegory for the real world because it contains all the same issues, the same ambiguity, the same human beings, but it also most times can provide some sort of an answer, a definition, a scoreboard.

So I use sports analogies still, and as I grew older and began writing, acting, and directing, the comparisons come even easier. If you try to create, and work with others trying to create together, it’s obvious that the parallels to an athletic team are not only simple to envision, but true. Working on a film, writing a script with someone, or acting in a play with a cast, all are team efforts where the same concepts hold true as they do in sports. A success becomes when you are submerging yourself for the good of the group, when you realize that the strength of the performance is only as good as the weakest link, when you trust in the others you’re on stage with or sitting in front of a computer with, when you can see that teamwork materialize before everyone’s eyes, when everyone’s listening, playing, committing, enjoying. Working.

This is quite a long-winded way of saying: I’m really excited about the team I’m working with right now.

Rehearsals for Presidential Suite began last week. The show’s got a large cast, thirteen, and with the composer and me, it’s a bigger roster than any NBA team's. All during the writing of the script, people warned me, “That’s a really big cast. You’re gonna have trouble filling the cast. You’re gonna have trouble getting ‘em all on the same page.” People told Matthew and me to cut the number of roles down, to make it simpler, to lessen the risk that something might not work. We didn’t do that, because we thought it did the story a disservice. People shook their heads. People said we’d be sorry.

But much like New York Jets’ quarterback Mark Sanchez, people are all too-often inaccurate. I like my team.

What I’ve been thrilled to discover over the past week is that the team that my partners and I have assembled is full of members who are talented, professional, and enthusiastic, full of players who make me smile everyday at something they do that’s a discovery to me. I might just have the 1970 New York Knicks. I might just have a team I’d be excited to use as an analogy in order to bore the parent of a high-school speech club member.

Or bore someone reading this blog. Whatever. I like my team. And when we open on September 27th, I don’t think we’re finishing fifth.

Posted by Sophisticated Rogue at 6:46 AM 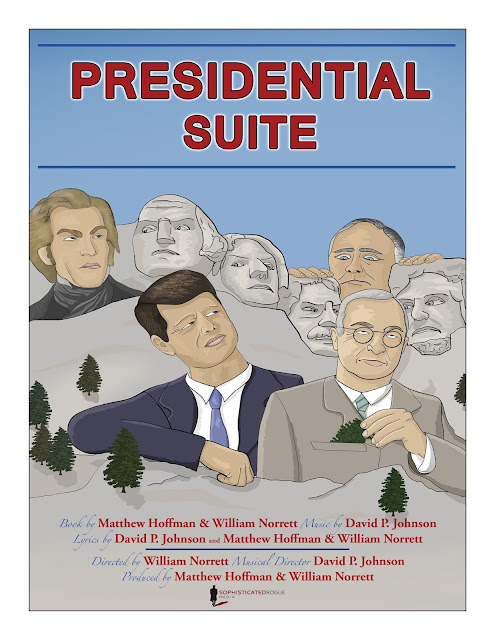 Things continue apace with Presidential Suite as we move towards the start of rehearsals this Saturday, August 10th. Here you can check out our first illustration, for the web-only, which we think gives a nice sense of the whimsical fun to be had during the show.

As the week progresses, I'm working on nailing down rehearsal time/space, listing, lining up, and hunting down the props and costumes that we're gonna need, and trying to rest up so I can be prepared for the next two months. Looking at my schedule, it does NOT appear as if I'm going to have much time to relax before we open on Friday, September 27th.

Every day seems to bring with it a different fire to put out, a different challenge to overcome, or a different obstacle to be avoided. But I'm determined during this process to take each thing as it comes, to roll with the punches and inevitable dramas that arise. I've committed to not reacting when something arises, to taking a step back, a deep breath, and a positive eye...Bets on how long that'll last?
Posted by Sophisticated Rogue at 8:42 PM